Using your computer’s sound card to do digital modes over ham radio, you will need an Audio Interface Unit.  Here you will see my design goals for my new interface unit.  I will include a schematic and other documentation as the project progresses.

Bob, W5BOB helped me build my first Audio Interface Unit for my ham radio when I was first starting off in radio. Bellow you will see a photo of the Audio Interface Unit’s schematic.  The unit did what it needed to do at the time.  Throughout the years, I have built different interface cables, so I could get on the air with digital communications such as PSK-31.  My last interface was of poor craftsmanship, and did not do the job as good as it should have.  It turns out that the audio transformer between the radio and the computer was not an isolation transformer as I thought it was.  Now, it is time to do it right. 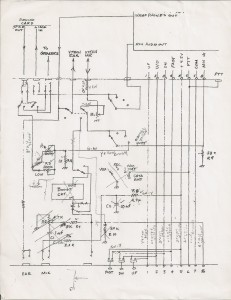 Most of the software that I have been using, the software keys the radio through the CAT control, but other software is not as sophisticated.  Rather the software requires you to use a Serial port on your computer to activate the PTT.  Most computers no longer include RS-232 (serial ports).  It would be best to control your radio via USB.